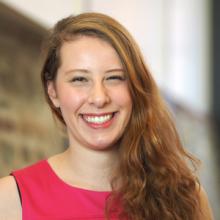 Amelia is the co-founder of Hatch, a company making it possible for anybody to design and launch a mobile app without coding.

Previously, Amelia served as the Executive Director of the Student Language Exchange, an education nonprofit she founded while in college to equip students with the cultural and linguistic skills they need to collaboratively engage with often-overlooked communities around the world. Upon graduating in 2014, she began to work on SLE full-time. Over one year, she grew the organization to operate programs in 32 languages (e.g. Bengali, Haitian Creole, Vietnamese) in seven cities.  An active global education advocate, Amelia has written about language learning for the Atlantic, Forbes, the Huffington Post and USA Today, and spoken about language education at South by Southwest, the Capitol, and numerous academic conferences. Amelia also serves on the selection committee for the C.V. Starr Social Innovation fellowship, as a mentor for social entrepreneurs still in college, and as the DC Director for the Vinetta Project (an initiative to support female tech entrepreneurs).

Amelia graduated from Brown University in 2014 where she was elected to Phi Beta Kappa as a junior.

Amelia is no longer with Hatch Apps.