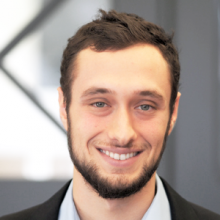 Sam Pressler was the Founder and Executive Director of the Armed Services Arts Partnership (ASAP). He is a 2015 Echoing Green Global Fellow, 2016 Halcyon Fellow, and 2017 Forbes 30 Under 30 awardee. He has been recognized by Americans for the Arts in their Leadership Spotlight, and was named to the HillVets 100 list as one of the 100 most influential people in the veterans space. His work with ASAP has been highlighted on CNN, ABC News, the Washington Post, NPR, PRI The World, PBS, Soldiers Magazine, Military Times, Stars & Stripes, and Task & Purpose, among others. Sam graduated Phi Beta Kappa and Summa Cum Laude from the College of William & Mary in 2015.

Sam is no longer with Armed Services Arts Partnership.